Originally printed June 23, 2011.
"I'm writing this letter in the hope that you will see how the humanities -- our understanding and exploration of our own role in the human narrative -- challenge and sustain us in times of trial and woe."


That's part of an over-the-top fundraising letter that Zeke Pappas, the 33-year-old protagonist of Dean Bakopoulos' new novel "My American Unhappiness," writes to the supporters of the Madison, Wis.-based Great Midwestern Humanities Initiative. Zeke has directed the fictional initiative since 1998 -- in the midst of the funding-plush years of the late Clinton administration -- and the novel focuses on how poorly both he and his organization fare in the economic collapse of 2008.


But it's obvious from the first page of Bakopoulos's novel -- even from the blurbs -- that Zeke is a buffoon. He's self-deluded on the order of Ignatius Reilly in "The Confederacy of Dunces." He's rhetorically enigmatic enough to be Chauncey Gardiner in "Being There." And he's functionally alcoholic enough to be in Frederick Exley's "A Fan's Notes." 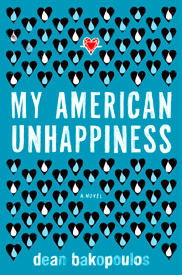 "Delusional but smart." That's how author Bakopoulos describes his main character. "He has spent 10 years explaining the mission of this organization. He knows the rhetoric. He even believes the rhetoric. And he's smart enough to use the rhetoric. But emotionally he doesn't know what's appropriate. He can't read people. He has no sense of when he's in danger or when he's in love."


Zeke, in fact, is a perfectly imperfect avatar of the the 2000s decade. He has a frighteningly accurate ability to predict what perfect strangers will order in Starbucks -- he can't do it for someone he actually knows. He manages a humanities initiative that ends up only able to sponsor his own "Inventory of American Unhappiness" project. And he has an intuitive sense of the rhythm of social networking and other forms of limited and impersonal communication, but he is lost in a world where real people have to have real conversations.


Yet as self-deluded as Zeke is supposed to be, Bakopoulos often provides his first-person narrator with long passages of cultural analysis that are simultaneously insightful and preposterous, transcendent and banal, mystical and pedestrian.


"Zeke is a version of me without the discipline of what to say and do when. Without the idea that every obsession isn't worth following," said Bakopoulos, who teaches writing at Iowa State University but who served as director for the Wisconsin Humanities Council in the 2000s.
Bakopoulos goes as far as to include an exchange between Zeke and a federal agent that is an almost "verbatim account" of a conversation Bakopoulos had with a Republican lawmaker at the Wisconsin State Capitol years ago.


"The humanities are certainly not uplifting," Zeke replies when the agent asks him whether art is supposed to make people happy or unhappy. "They are the study of humankind's narrative -- its tragedies and trials and sorrows and hurts and woes and continually broken spirit -- how could that possibly be uplifting? They are, in an intellectual and spiritual way, however, exhilarating."


It's a definition of the humanities that sounds like something former Iowa Rep. Jim Leach, now the real-life chairman of the National Endowment for the Humanities, would say. But it's offered at a time when Zeke is drunk in his office, the agent is investigating the organization's questionable accounting practices, and Zeke is discovering that his biggest supporter in Congress will soon be facing a sex scandal.


Bakopoulos said he finished the first draft of the novel about the time of the 2008 election. So he didn't know how the next two years -- during which he did the final revisions -- would cause such a profound change in America's economic optimism. And he certainly couldn't have known how, just months before the novel's release, Wisconsin state government would be at the point of breakdown.


"I hope that the novel lays the blame on everyone," Bakopoulos said. "We were all at fault for deluding ourselves that things always would get bigger and better. ... For believing that there were endless resources to fund all our pet projects -- whether on the right or the left."


Bakopoulos -- who sounded incredibly cheery and upbeat on the phone -- will be reading from "My American Unhappiness" at 7 today at Prairie Lights.